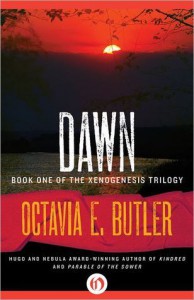 Dawn by Octavia Butler appears on a lot of must read lists for a reason. The way the humans react to their captivity, to the aliens, and to each other makes the reader take a hard look at humanity. It's very easy to not like what you see. It's easy to want to walk away from a book that leaves you with a bad taste in your mouth at the thought of humanity in general. But you can't. At least, you shouldn't.

Because, face it, as a whole, humans suck.

Lilith is a fantastic character in Dawn. She feels so very real. She's not perfect. Sometimes she shouts when she should whisper. Sometimes she backs away when she needs to just beat the crap out of someone. She's strong, but I would say that her strength is in her adaptability more than a core of steel or anything like that. She's not a heroine, either. She's just Lilith, and that's enough.


But...have you ever been able to appreciate an author's work, but not particularly like it? You can recognize that they have some great points, acknowledge a serious talent, but overall you're just kind of 'meh'?

That's how I feel about Dawn, book one of the Xenogenesis trilogy.

I've read it twice now. The first time I read it, I didn't like or appreciate it. The second time I read it, I picked up on a lot of stuff that I'd missed before. So I found myself nodding, highlight passages, etc.

There were three passages in particular that I highlighted, and I should think the reasons why are obvious.

“I cannot give you such things. Not to write or to read.” “Why!” “It is not allowed. The people have decided that it should not be allowed.”

“Do you understand why they chose you—someone who desperately doesn’t want the responsibility, who doesn’t want to lead, who is a woman?”

There’ll be no rape here,” she said evenly. She raised her voice. “Nobody here is property. Nobody here has the right to the use of anybody else’s body. There’ll be no back-to-the-Stone-Age, caveman bullshit!"

But at the end of the day, I still didn't reallylike Dawn. And I have to tell myself that it's okay. I don't think Butler sucks or anything like that. It's simply that her style of story-telling doesn't appeal to me. I do believe she is a writer that everyone wanting to expand their knowledge of sci-fi should read. I know that she talks about things that need to be talked about. Just when it comes right down to it, I prefer hard science fiction and stuff with lots of action.

Overall, Dawn is a well-written book that is really is a must-read for science fiction fans. Butler's contributions to the sci-fi field are undeniable. But the slower speed and character-focused writing will not appeal to everyone.