At the Hands of Madness Review 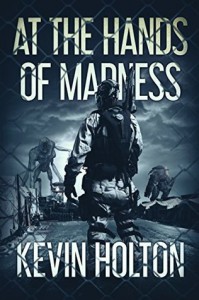 Source: Kindle Unlimited
I loved Earth Abides. Earth Abides was a wonderful book, but it was also solemn and thought-provoking, and there's only so much of that my brain can take. So, after I finished that book, I was looking for something to cleanse the palate. Luckily, I'd snagged this book I had seen talked about on Twitter a few days ago, and remembered vague promises of punnage. It sounded like just what I needed, so I loaded it up. It was exactly what I needed. At the Hands of Madness was B-movie gloriousness, with just about everything a girl could want in it.
At the Hands of Madness was fast-paced, action-packed, and had characters that made me laugh. There was also an appropriate amount of puns, which made me happy. (Though that 'metal' one was completely groan-worthy.) There is mention of a dead child, but it's not a small child, so it's not as bad. I wish it hadn't been there at all, but at least he didn't go fully there.

Now, technically you could grouch about the fact that this ends on a cliff-hanger, but honestly, it doesn't really feel like it. I felt like the amount of story that I got in this book was perfect. If At the Hands of Madness went on any longer, it would have felt 'too much'. I was happy with it, and satisfied at the end. We got one full arc in it. It wasn't tied up neat and tidy with a bow on it, but sometimes that just isn't necessary.


There were a lot of good quotes in this book. Too many for me to all share here, so I've selected three of my favorites to share with you.


This first one just sort of sets the tone for the book.

“Hey, dudes, I don’t mean to interrupt, but we’ve got a two-headed dimension-manipulating kaiju stomping its way over here, and you should probably get up before it murders the unholy fuck out of you.”

This one... okay, yeah, bad sexist me, but considering it was a guy who wrote this... It had me and a few of the friends I showed it to absolutely cracking up. Because, YES.

“Nanites shapeshift, remember? They don’t need bras.” They passed a second of awed silence before Lisa replied, “And you didn’t want to go full Nanite why?”

And this was one of the first lines I highlighted. I liked that he had a character that was obviously mentally ill, and yet there was rarely a big deal made out of it. The main character really does his best to just appreciate her abilities, and accept her for who she is. And the rest of the troop tend to treat her that way as well.

Allessandra watched from the sidelines, sitting on a cooler, eyes occasionally flicking off to the side to acknowledge something exclusive to her version of reality.


Unfortunately, I can't say I necessarily agree with how things turned out in the end for Allessandra.

(This next part contains very mild spoilers. I've tried to be as vague as possible, but I've hidden it behind a spoiler tag just to be safe.)

Now, the other thing that kept At the Hands of Madness from getting a full enthusiastic five star rating from me was the speeches. Look, we all love a good speech every now and then. I mean, can you think of Independence Day without thinking about Paxton's speech right before the alien ship gets sphincter-bombed? I don't think so.  But, At the Hands of Madness is only 151 pages long, and there were at least three or four 'speeches' in it. Not anywhere near the pre-sphinctering level, but still enough to make you think "Another speech (inspirational and/or observant)" and want to skip it.


Overall, though, Kevin Holton has a way of turning phrases that I thoroughly appreciated. His action scenes were clear, quick, and sometimes completely disgusting. His characters were likable, funny, imperfect, and easy to identify with. While there are lots of crude invective, there's no sex or hormones screwing things up. His Kaiju was one of the most different-looking I've read about yet.  So, bad puns, crude insults, gigantic no-headed monsters, pyros, nanos, and lots of 'splosions. What's not to like? Yeah, it has its issues, but it's still vastly entertaining.